Discover Békéscsaba and relax at the Fiume Hotelben

Turn of the century elegance greets today’s traveller in the Hotel Fiume. The hotel has 39 rooms in differnet type. Our guest can choose single, double/twin, and triple room. The single rooms are aviable in economy or standard categories as well. The biggest part of the rooms have a beautiful view to recently renovated “Szent István” square,

The history of the most well-established hotel in the county seat, Békéscsaba, roots back to the 18th century. The landlord’s inn was located in the center of town, roughly where Hotel Fiume is, which was then followed by this building. The new restaurant and hotel was built from 1867 until 1868 for 123.000 pengő based on the plans of Ernő Sztraka, the town’s chief engineer. 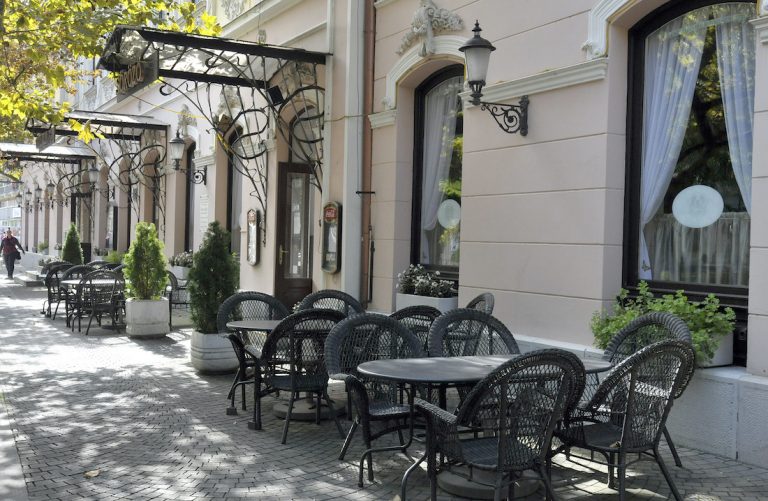 Oblique arched shops are located in the ground floor of this neoclassicist, single-story building. At that time the Debrecen Fiume railway was completed, which included Békéscsaba as well. The new railway increased the importance of the town so much that the building was christened “Fiume” at the opening in 1870. In 1894, chief engineer Gusztáv Ádám (Sztraka’s official successor) redesigned the ground floor and the façade. The building got its current style, early eclectic historical building property according to the works of József Wagner, building contractor from Csaba.

Later the Fiume was supplemented with an agricultural building and ice-house. The courtside 18*10 meter single-story restaurant, also known as public winter garden, was built at this time.

Minibar in the rooms

Restaurant in the hotel

Free use of the sauna